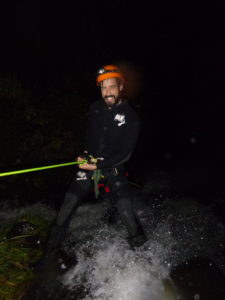 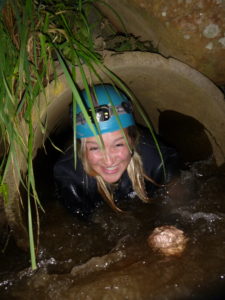 A combined staff-guest squad celebrated the winter solstice a couple of months ago with an epic sunset canyoning adventure led by a charming Scotsman Ben from Raglan Rock.

Piling into his van outside the hostel, it started to dawn on us no one really knew what we were letting ourselves in for. Canyoning…what exactly is that? Vague associations with caves spring to mind. Or is it rivers? Did someone say something about abseiling?

The nerves mounted as we pulled on thick wetsuits, jackets, hoods, helmets, socks and wellies/gum boots. We were clearly headed for an evening in some cold water. Still, with this much kit at least we weren’t too worried about the chill factor.

A short drive and safety briefing later, we found ourselves clambering down a bank into a river. A few minutes of splashing through shallow waters and Ben was down on his knees crawling into a waterpipe. The guys at the front exchanged looks, was he expecting us to follow? Much hilarity ensued as we watched each person’s neoprene-clad bottom wiggle off into the darkness.

After some more splashing (and several full body submerges of the less dexterous of the group – to be fair, there were large, slippery rocks to navigate) we arrived at the top of a small waterfall. Well, it seemed small until Ben announced we’d be taking it in turns to launch ourselves off the top of it into the pool below. He showed us how to clip our harnesses onto a rope and lower ourselves to the edge of an outcrop, then let go and leap! The initial apprehension quickly turned to calls for a second go and the keener among us scrambled back up to jump again.

If we thought the first waterfall was intimidating, the next one was met with expletives in a whole range of different languages. It was only mildly comforting to hear we wouldn’t be jumping off this one, but abseiling down it (for anyone not familiar with the concept, it was basically bouncing down a rockface backwards attached to a rope). Slightly more comforting was watching Ben dash down and back up again spiderman-style to put the ropes in place. If he could do it like that, how hard could it really be…? The answer from the guys who did accidental headfirst dives at the bottom might be ‘very’, but with varying levels of speed and grace (and much whooping and cheering) all eight of us made it down.

The rest of the trip was more exhilaration-light and magic-heavy (with the exception of being confronted with a rock covered in giant wetas…even Ben was shocked by the size of these prehistoric-looking bugs). We started heading upstream and were met by phosphorescent limpets glowing under the water and riverbanks blanketed in glow-worms. The piece de resistance was a huge cavern at the bottom of the mightiest waterfall yet, where Ben handed round mugs of miraculously hot tea. We switched off our headlamps and sat surrounded by hundreds of glow-worms, underneath the stars, sipping tea and marvelling at the wonder of the natural world (seriously, it felt like something straight out of Avatar).

Eventually we managed to rouse ourselves from the group reverie and headed back to base. Ben dropped us back at the hostel just in time for a much-needed soak in the hot tub – the perfect end to the perfect evening. Thanks Ben and Raglan Rock, as well as the fabulous guests who made it such a fun adventure!•